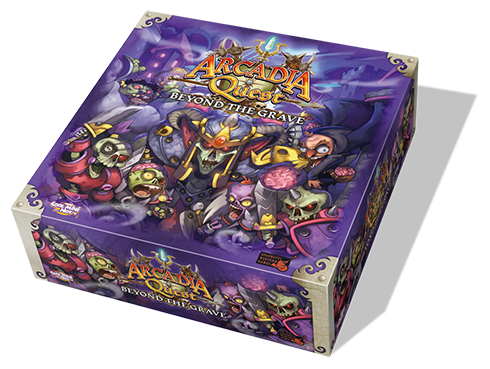 Dr.Spider’s vile experiments in his search for immortality have unleashed the undead on the streets of Arcadia! Ghosts, zombies, and skeletons terrorize the city under the command of an ancient legend, now freed from his tomb: the Dread King! It’s time for your heroes to put these monsters back where they belong: six feet underground!

In this campaign expansion for Arcadia Quest, players pit their Guilds against the Dread King’s undead horde and Dr. Spider’s freaky sidekicks. Progressing through an all-new branching campaign, the Heroes will earn new weapons, equipment, abilities, and magic spells unearthed straight from the afterlife! 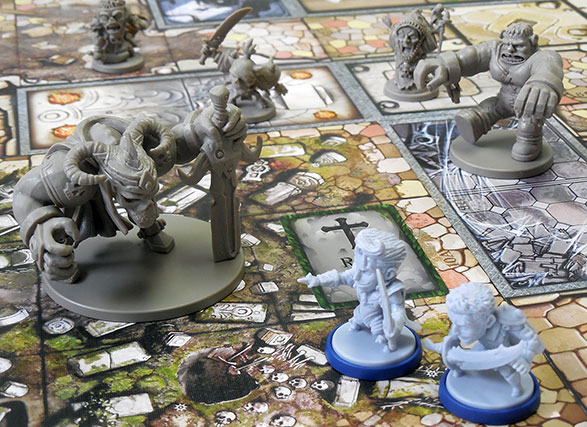 This expansion introduces several new mechanics to the game, including equipment that gives Heroes more power the more times they’re killed, magic spells that can banish their target to the netherworld, and ghosts that can move and attack through walls. This expansion also contains 9 brand new scenarios for you to choose from!

The new Tombstone cards allow Heroes to trigger all sorts of unexpected events to hinder their opponents, aid their Guild, and even control the Monsters on the board. This adds an extra dynamic to the game, making monsters both a greater threat, and a more useful tool for heroes to control. The Tombstone cards are positioned directly on the board, populating it with tombstones for the Heroes to explore.

The Spawn tile also becomes a more integral part of the game, with some Upgrade cards and Monsters being able to banish a character to the Spawn tile, without even killing it (and that includes Heroes!).

Recruit your Heroes (with the addition of the Black Brothers) and dig up the loot to build unstoppable combos and become the supreme Guild. Only you can vanquish this menace from Beyond the Grave!

You will need the Arcadia Quest core box in order to play Beyond the Grave.

Beyond the Grave Gameplay video with Eric Lang